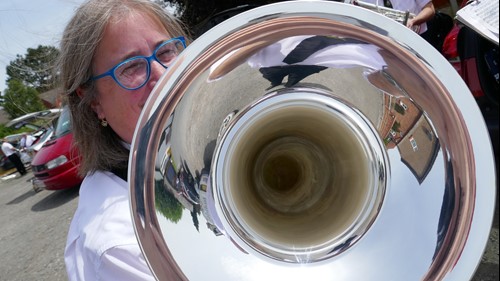 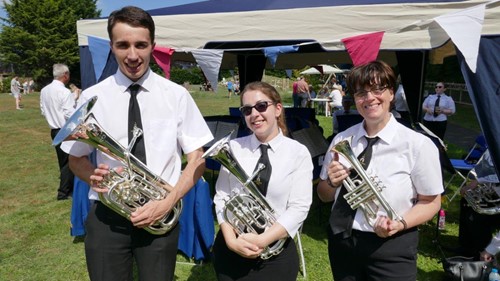 One member of the Junior Band has had Exam success this past week with a Grade 2 Distinction Pass on Trumpet. Very well done to Jake and keep up the good work.

Many congratulations go out to three(3) members of the training band as they all passed music exams in the last couple of weeks. They are

Very well done to all 3 and also to their tutor Kirsty Bargh for all her hard work.

Members of both bands made a visit to Newton Primary school on 22nd March and had a very appreciative group of children who were very interested in the instruments we took along for them to "have a go with" . The children asked lots of questions about both the junior band and the way that they can join the band. If you would like the band to visit your school please contact [email protected] for further details

Weeks of hard work paid off for the City of Chester Band on Sunday 28 January with some success in the “Brass @ The Guild” brass band contest held in Preston’s Guild Hall and Charter Theatre.  Playing in the Third Section, the Band were placed third out of thirteen with Kirsty Bargh, Chester’s Solo Horn player, being awarded the “Sarah Gardner Trophy” for the best horn player in the section.  Kirsty started playing the Eb Tenor Horn with the City of Chester Training Band in 2000.

The contest is seen as an opportunity for bands to showcase their playing of the set test-pieces ahead of the regional championships which are due to be held in Blackpool’s Winter Gardens complex on Sunday 25 February.  Bands in the prizes at Blackpool qualify to play in the national championships held in September in Cheltenham with Championship-level bands playing in the Royal Albert Hall, London in October.

Due to professional commitments with the Hallé Chester’s tuba-playing Musical Director, Ewan Easton MBE, was unable to lead the Band at Preston.  Conducting in his place and for the first time at a contest, too, was Bandmaster Matthew Birkett (28).  Not a bad start for Matthew!

St Helens-born Matthew Birkett is one of a number of talented and enthusiastic young people who have come to study in recent years at Chester University and join the Band before going on to find work and settle in the area. Along with a thriving training band, students such as Matthew have helped to re-vitalise the City of Chester Band (established c.1853) which is a part of the city’s cultural heritage.

As well as continuing to work on the test-piece “Napoleon on the Alps” by Philip Harper, commissioned in 2016 by Jugend Brass Band Forum Ostschweiz (Switzerland), the Band is preparing for a busy summer season of concerts around the region.

For over two years the Secretary of the City of Chester Band kept Saturday 14 October 2017 clear in its engagement diary for a special event: a wedding, that of two band members Kirsty Blain and Alexander Bargh who met in 2008 whilst at university in Aberystwyth.Kirsty plays the Eb Tenor Horn whilst Alex plays percussion.In addition to occupying the Solo Horn position, Kirsty is also the Band Secretary!

Kirsty was one of the first to join the City of Chester Training Band when it formed in 2000.Alexander hails from Monmouth.

The wedding took place at St John the Baptist Church in Aldford, the very church where Kirstyâ€™s parents, Paula and Tony Blain, had married in 1986.With warm, sunny weather ideal for a wedding, the fine church acoustics helped the Band to play all the music associated with the ceremony: as guests arrived, accompanying the hymns, during the signing of the wedding register and as Mr and Mrs Bargh left the church to warm applause and the music â€œIf I didnâ€™t have youâ€ from the film Monsters Inc.

In the evening band members joined Kirsty and Alexander, their families and friends, at an evening reception at the Cock oâ€™Barton, Barton Road, Malpas.

Kirsty and Alexander are pictured after their wedding.

In November this web site will be replaced with a new one currently under production. The existing site has served the Band for over 13 years. It was built by Philip Clowes who has looked after it throughout. The City of Chester Band wishes to place on record thanks to Philip for all his work over the years.

Further information about the new web site will follow.

Our Training Band needs a Conductor.We have an active group of enthusiastic young people aged 11 to 70+ who undertake engagements in their own right. We are also developing another ensemble for children aged 7 â€“ 11, and youâ€™ll be working with Ewan Easton MBE, Musical Director of the City of Chester Band, in developing players for the future.