We got very lucky with the weather today as the band performed at Shrewsbury band stand this afternoon! On behalf of the band, we would like to thank James, Vicky, Leon, Chris, Liv, Hannah and Emily for helping us out. Greatly appreciated. 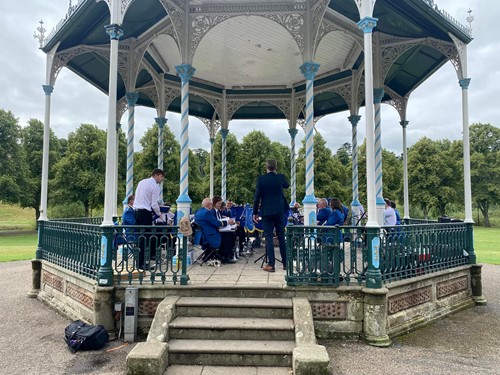 Our Canadian friends from the Delta Music Makers are visiting us on their 2022 UK tour, with a joint concert taking place Thursday August 11th at St Luke’s Church in Huntington, Chester.
Entry is free, refreshments will be provided and any donations (big or small) you wish to make to the bands on the night would be greatly appreciated.
On-site parking is limited, so please be prepared to find considerate street parking.
You can also reserve a seat via www.ticketsource.co.uk or through the link posted on our social media channels.
We hope to see you there! 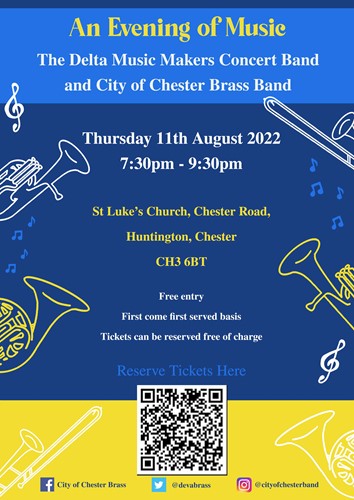 The band had the honour of performing at Sarah and Sean’s wedding yesterday for both the ceremony and in the evening. We had a fantastic time celebrating with them and made full use of the karaoke!
On behalf of the band, we would like to say a huge congratulations to Sarah and Sean on their marriage and wish them every happiness for the years ahead!! 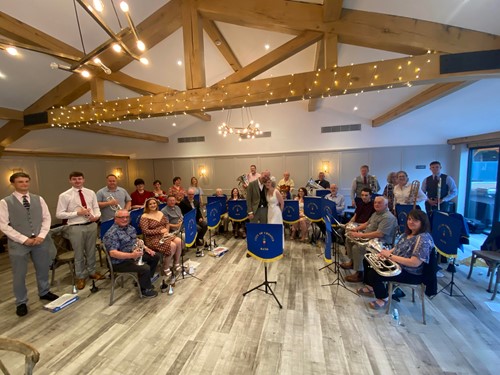 The band had their yearly AGM meeting on Monday, where our player’s player and MD’s player awards were presented.
Our MD Ewan picked cornet player Ryan Jones for the MD award. Ryan is one of Chester’s own, starting in the training band and recently working his way up into the main band onto back row. Big congratulations to Ryan for this achievement!
The band voted for our solo trombone player Callum Hill for the player’s player award. Callum started playing trombone only 6 months ago and has come on leaps and bounds since. Sadly, Callum is leaving us as his time at university has come to an end. He’s currently learning bass clef to take on the challenge of bass trombone back with his home town band. Good luck Callum and congratulations! 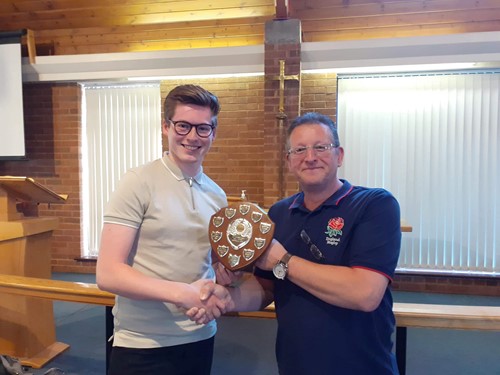 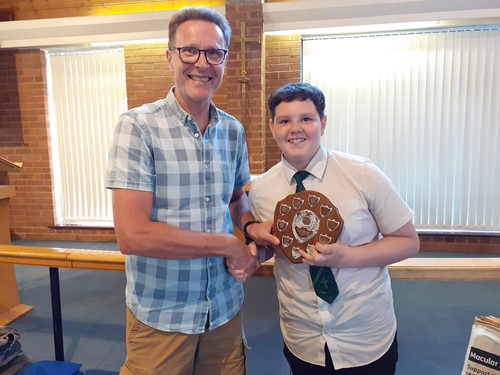 The band travelled back over to Oldham for the first time since 2019 to take part in the 2022 Whit Friday March Contest on June 10th. First one in 3 years due to Covid. Our road march was 1914 and we took on the challenge of Ravenswood on the stand. The challenge paid off as the band were awarded the following:

The band had a great success this weekend at the North West Regionals in Blackpool! After being drawn the daunting place of first band on, the band played Facets of Glass to the early birds who made the 9:30am start time to watch. 14 bands and a trip to the pub later, the band were awarded 3rd place and best Soprano player for 3rd section. Our high placing means we have been promoted to second section from next year. The band are over the moon with the result and are looking forward to the challenge ahead.

The band had a great evening recording music and interviews for the programme 'In The Band Room' on East Leeds FM. The programme is due to be broadcast on Tues 25th Jan at 10pm. Thanks to all the participants! 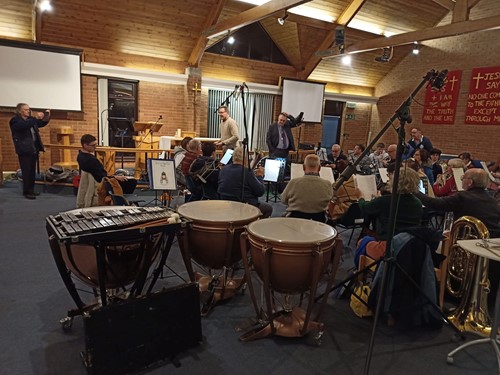 Training & Junior Bands Are Back!

After 18 months off the City of Chester Training Band & City of Chester Junior Band both resumed to rehearsals back in July 2021. Within a few weeks of getting back up to speed with playing in an ensemble again, the Training Band have been able to perform at a number of engagements recently such as the Chester Marathon, Chester Half Marathon, Gresford Carol service, Saughall Carol service and Huntington Carol service. The Junior Band remain under the guidance of Ewan Easton MBE, and the numbers are steadily rising again post return. We have a wide variety of ages within the two groups. 7-11 in the Junior Band and 11-80 something with a full range in between in our Training Band.

Both bands are keen to return to full numbers again and are looking forward to doing a wide range of concerts and engagements throughout the year.

If you are interested in learning an instrument this year or joining please contact Tony Blain, Coordinator, on 07904272611 or e-mail: [email protected]  Many of our players have returned to playing after a long break.

The City of Chester Band are preparing to compete at the North West Area Brass Band Championships held in Blackpool Winter Gardens on Sunday 27th February 2022. Sadly the 2021 instalment of the Championships had to be cancelled due to the Covid-19 pandemic, but the competition resumes as it was in 2020 with the band remaining top of the third section. City of Chester were unlucky to not gain promotion to the second section last time with a respectable 5th place, however another good performance this time around could secure promotion and a place at the National Finals in September. 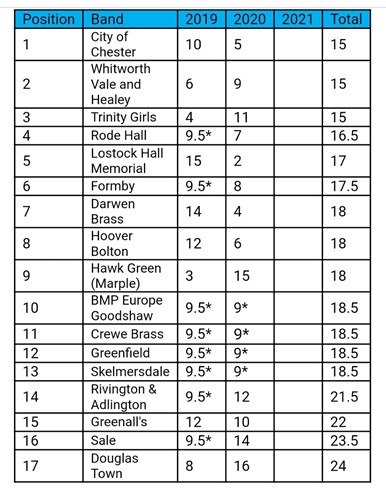 * (Indicates that the band were in a different section that year, so a median average position awarded).

Merry Christmas from City of Chester

As the banding year comes to an end, with one more job to do, it is a time to reflect and give thanks.
We started 2021 in lockdown, again. No band and the start of a year of yet more unknowns. However, thanks to the enthusiasm, hardiness and tenacity of the band, as soon as we were able to, on 29th March we started up the 6 man garden bands. Rain, hail, sleet and wind didn't stop the intrepid banders of City of Chester. Thank you for your joy in music, thank you to your families and friends for supporting that joy.
Come 17th May, thanks to the continuing generosity of the Chester racecourse, we once more commenced outdoor rehearsals of the main band. All of this under the direction of Ewan Easton MBE. Like for so many other professional musicians this year has been a difficult one, but his never ending enthusiasm and commitment has been an inspiration and the band are immensely grateful that a musician of his calibre continues to guide ,teach and motivate us all.
During lockdown out band manager Matthew and his intrepid work crew of Paul (our chair) and Robert (our treasurer) continued work on our band room. Unfortunately that work has uncovered a mass of work that is needed to the roof, walls and heating, which will need both funds and extensive work for quite some time to come. But we are grateful for the Herculean efforts made and hope you've enjoyed the bible tracts you've uncovered in the walls, if not the mouldering damp smells!
June 20th we had our first band job in over 12 months! A March and village fair and it felt so good to be back.
Also in June we said our sad goodbyes to Doug Dalzell, the holder of the bands hip flask and cheque book. One of which was permanently open, the other permanently closed. It was a privilege to play at his funeral.
July 3rd and training band restarted. Our band will die if we do not produce the next generation of players. Covid decimated our learner band numbers but, since September, they are recovering and many thanks to Tony, Matthew, Paul, Ewan, Les and all the parents, supporters and players of training and learner bands. It is still paying off as Ryan from training band joined us on back row cornet and has proved to be a great asset and a hard working member of the band, as well as the youngest.
We gained a new bass trombone, Chris, and a new front row cornet, Tricia, who thought we were joking when we said we rehearsed outside. On a sad note Sammy, our solo trombone, returned home after his studies in Chester had come to an end. His will be a difficult seat to fill in many ways!
September 12th we entered our first contest since February 2020 and won some silver ware and a nice cheque at Blackburn and Darren hymn and March contest. We also had a meal out, our first band social for a long time, followed by an inaugural band golf day, enjoyed by all.
October 27th we had a really red letter day, our last outdoor rehearsal, as we moved into St Luke's in Huntington since the band room is too small for covid safe rehearsal.
December 3rd we played our first indoor concert for two years!
As we go into another year of uncertainty, it is easy to get dispirited about the future and the future of brass banding. However, we have one more job that illustrates how vital it is to keep music going. On Tuesday a small group of us will play at the funeral of someone most of us never met. Last year we were asked to play outside the room of someone who had moved into a nursing home before lockdown. They had seen no one, except staff, and were confined, like the rest of the home, to their room. Their favourite Carol was "In the Bleak Midwinter" and they asked if we could play it. On a cold December evening, in the rain, we gathered outside her window and played. We could only see a vague outline of her in the darkness. She sent a beautiful email to say how after such a miserable time it was so uplifting to hear her favourite Carol and the harmonies. She passed away recently and the family asked if some of us could attend the funeral and play "In the Bleak Midwinter", we feel proud to have provided a small ray of light for her at such a dark time. Music has a power to move, uplift and engage in ways we often don't appreciate. It is a privilege we have to perform and, as a collective, produce something beautiful in dark and strange times.
Who knows what 2022 will bring but we will try our best to approach it with positivity and hope for us all better times ahead.
Keep well, keep safe, Merry Christmas.
page 1 / 82